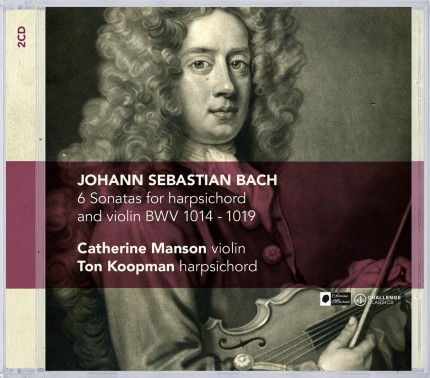 By departing in virtually every respect from the conventional model of the baroque trio sonata, Bach’s six Sonatas for harpsichord and violin let both instruments participate equally in the unfolding of the thematic-motivic material. They establish a genuine dialogue between the two performers as Well and, thereby, actually pave the way for the classic duo sonata. The dialog between these two musicians is equal and enchanting and the intimate nature of this recording draws the listener immediately in the music.

Catherine Manson enjoys a versatile performing career specializing in period performance as a soloist, chamber musician and orchestral leader.
She was appointed by Ton Koopman and the Amsterdam Baroque Orchestra as leader of the orchestra in 2006. As first violinist of the classical London Haydn Quartet she has performed in venues such as Carnegie Hall, the Concertgebouw in Amsterdam and London’s Wigmore Hall.

This new double-cd of two outstanding musicians is available in our webshop from August 3!